The Underdevelopment Imaginaries series continues the line of work started by Miguel Aguirre in his project A Ten-Pack of Cigarettes and a Box of Matches and was presented for the first time in the Sala Luis Miró Quesada Garland in December 2015 and, subsequently, between February and April 2018 at the MUCEN – Central Museum of Lima. In the Miró Quesada, Aguirre presented the piece Cityscape, a fabric made of sheep wool by master Elvia Paucar, originally from San Pedro de Cajas, village located in the department of Junín. Based on a linographic print titled Weg zur Arbeit by Augustin Tschinckel – an artist of Czech origin associated with the Progressives of Cologne, Germany, from 1928 to 1934 – the Peruvian artist Aguirre, modified the image and transformed this “way to work” by diverting it towards unemployment and closing of factories; but from the very materiality of the artisan fabric that in Peru has subsisted to changes in the productive model.

Thanks to the ninth collaboration between Aguirre and Paucar, three fabrics were produced. In the first of them – titled Underdevelopment Imaginaries: bankruptcy – the artist takes over the work of Tschinckel and updates his own linographic print giving it more modern elements: a large group of workers stand outside a factory. Nothing indicates that it is active. Are we facing a strike? To the bankruptcy of the company perhaps?

In the second, Underdevelopment Imaginaries: tail, Aguirre seizes various isotypes created by German artist Gerd Arnzt (Tschinckel’s companion in those years of progressive “romanticism” in Cologne and main figure of the movement) and creates a long line of people composed of adults and children, men and women waiting to buy bread or oil or kerosene. Both images were the usual landscape in the years of economic hyperinflation of Alan García’s first government in Peru (1985-1990). The country was in economic and political ruin and this circumstance is still remembered, not without some anguish, by the generations born before the beginning of the 80s.

Miguel Aguirre uses the graphic work of Tschinkel and Arnzt, and modifies it and frames it within a project that talks about a serious crisis that caused the loss of jobs, high unemployment and underemployment like the one that brought Fujimori to power and caused the establishment of a populist and autocratic government. 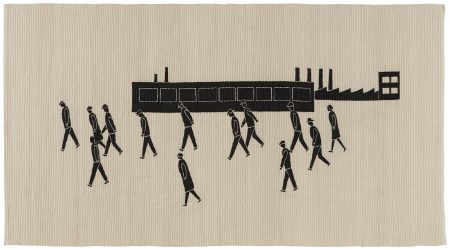 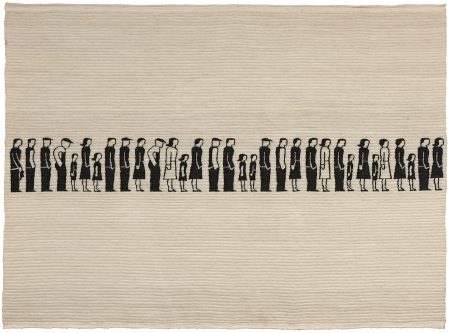 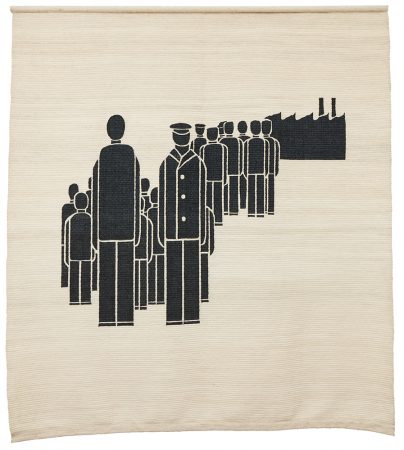